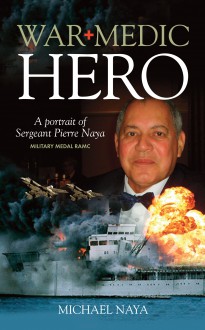 While at anchor in Fitzroy Sound on June 8 1982, RFA Sir Galahad was bombed and set on fire by enemy aircraft. Embarked troops included two companies of infantry and the main body of 16 Field Ambulance, men and equipment. At the time of the attack most of the troops were positioned in the tank deck, where substantial quantities of ammunition soon began to explode as the fire worked through the ship. Over the course of some two hours 135 casualties, the majority with burns and amputations, were evacuated to the Advanced Dressing Station already ashore at Fitzroy settlement. Sergeant Naya, Royal Army Medical Corp, was standing in the tank deck when he was thrown against a bulkhead by the first explosion and partially stunned. The lights went out and the tank deck began to fill with dense black smoke. A second explosion killed two men behind him, set his large pack alight and scorched the back of his head. Shrugging off the burning material, he managed to lead a third soldier by hand up two flights of stairs to daylight. There he paused to cut burning clothing from other soldiers with his scissors before mounting a third flight to the upper deck. He then helped to carry a man who had lost his a leg up to the forecastle, having first administered first aid and set up intravenous infusion. He treated many more casualties, included another amputee, and set up several more infusions, until all casualties had been evacuated, he left the ship on the last helicopter, later to be evacuated as a casualty himself. After only three days he returned to duty in the Advance Surgical Centre of the field ambulance, where he worked steadfastly through the most intense period of military activity and the passage of many battle casualties. He acted in the highest tradition of the Royal Army Medical Corps