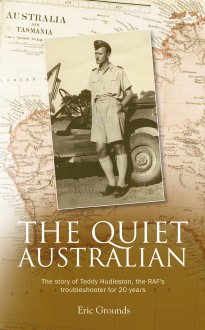 The story of Teddy Hudleston, the RAF’s troubleshooter for 20 years. Teddy Hudleston was a pilot of immense skill and talent whose wisdom and resourcefulness in both war and peace carried him up through the ranks of the RAF; a Squadron Leader at 28, he was promoted to Air Vice-Marshal at the age of only 35 and finally retired, after 40 years’ service, as Air Chief Marshal. He won the Croix de Guerre for his role in the Suez campaign and at the height of the Cold War he was made Commander of Allied Air Forces Central Europe, serving in the front line of the defence against the Soviets. He was knighted in 1963.

This very private Edwardian was dubbed by the newspaper obituaries ‘the Quiet Australian’ for his unassuming manner. His home life was more complicated, as author Eric Grounds knows well; for forty years Hudleston treated Grounds as his son. He has now paid tribute to him by writing this affectionate biography.