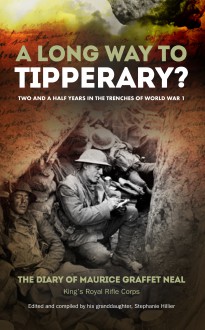 A Long Way To Tipperary

Maurice Neal was 15 when he joined the King’s Royal Rifle Corps in 1906. By the time his regiment was shipped off to the Somme to fight in the First World War, he was a relatively experienced young sergeant. He and his men soon found themselves plunged into the full horror of trench warfare, daily enduring the shock of losing comrades and lying for hours in the mud surrounded by dead and injured fellow soldiers and deafened by the thunder of the bombs and guns. Throughout, Maurice kept a candid and beautifully-written diary of events: “Suddenly, a convulsion shakes him from head to foot and he lies still. The blood rapidly drains away from his face and hands. He turns ashen grey, and I realize that no more will Paddy sing to us… I look to the man on my right. He is making a gurgling noise and blood is oozing from his mouth – he does not live long. What are our orders? Are we to lie like this until a bullet accounts for us all?” Now, almost a century later, Maurice’s diary can be published in full, thanks to the efforts of his granddaughter, Stephanie Hillier.