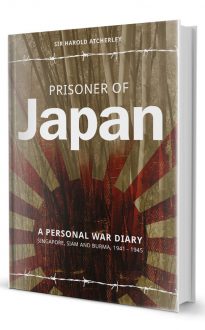 In the course of the Second World War, more than a quarter of a million European and American soldiers were taken prisoner by the Japanese in Malaysia, the Dutch East Indies and the Pacific. They went on to suffer years of deprivation and brutality, most of them failing to survive at all. Harold Atcherley was fortunate enough to be one of the survivors.

Throughout his time as a prisoner, from the fall of Singapore on 15 February 1942 until 14 September 1945, he kept a diary, which he was able to bring home with him. This book is based on that diary, along with other diaries and official documents. He was fortunate enough to count among his friends and comrades the celebrated artist Ronald Searle, whose drawings have been used to illustrate his text; they give a far better impression of what life was like for a POW of the Japanese than mere words can, though neither words nor pictures could ever convey the appalling stench of disease and death on such a massive scale.