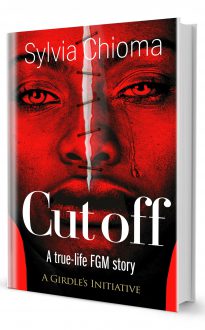 < Back to Anthropological Customs

Cut Off by Mereo Books

Aduke, a young Nigerian wife, is under extreme pressure from her mother and her husband, Kunle, to undergo Female Genital Mutilation because she has not yet conceived and they assure her it will enable her in their superstitious minds to become pregnant. She argues desperately against it, having heard that it is dangerous, but in the end, she is persuaded and then drugged while the operation is carried out. She is horrified to see that rusty knife the woman is using is the same one she had dreamed about in a nightmare in the first chapter. She suffers catastrophic loss of blood and almost dies. She is saved by the intervention of a doctor who lectures her mother and husband on the appalling risks of FGM. While she is being treated, they discover she is pregnant anyway so FGM was not needed.

The rest of the book is an account of FGM and the campaign against it and uses the story as an illustration of the wickedness, barbarity and superstition of FGM.

The barbaric and dangerous practice of Female Genital Mutilation (FGM) in childhood or early womanhood is the scourge of the women of many African and Middle Eastern countries, because of an ancient, misguided belief that cutting away the clitoral area increases fertility, eases childbirth and reduces promiscuity and increases pleasure for men.

This book combines a harrowing true account of one woman’s near-fatal experience of FGM in Nigeria with information designed to provide enlightenment on this abhorrent practice and why it should be stamped out in all the countries of the world where it is still practised.

Published with the support and backing of key and influential women from several countries and to support the FGM charity The GirdleNG.org. All proceeds from book sales will go to this charity

What women say about Cut off

‘’A few years ago, many women, even some educated ones, saw female genital mutilation as a normal and socially acceptable practise without understanding the devastating consequences but the story is changing fast, as awareness is getting mileage and rural women are now campaigning against it’’

“Cut Off is a compelling true-life story of a professional woman pitted against the traditional practice of FGM, leading to tragic consequences. A heartrending and harrowing look into one woman’s fate, which unfortunately, is the fate of millions of women and girls in this world. A must read.”

Leila Walsh, writer and member of the Planned Parenthood Federation of America (PPFA).

“Cut Off is riveting, petrifying, elucidatory and engaging. People should support this cause and make sure you gift someone this book, it’s totally worth it.”

“Cut Off is a contemporary work that paints the dark, scary but realistic picture of the conflicting values between our past and present. It’s a literary battle-cry for help and justice. I hope everyone does not just read it but CUT OFF joins in the fight to end FGM everywhere.”

“Wow! Indeed a “cut off” – this is breathtaking! Cut Off brings to fore the stark reality of the horrendous practice called FGM in Nigeria. With words crafted beautifully, the author brings home the challenges of domestic violence/FGM the average Nigerian woman is faced with as epitomised by the character of Aduke.

“Cut Off is a very interesting read. It is intriguing, intense and suspense-filled. The plot creates a vivid image in the reader’s mind in such a way that one feels he/she is alive in the story. The way the writer maintains a thread from the bus ride while adding a twist of flashbacks and still links up the story almost at the end still in the bus is indeed very captivating. The plot in its entirety is so captivating that I was held spellbound.”

“The concept behind this book amazes me. As an anti-FGM campaigner, the book brought out all the various misconceptions people have about FGM. Cut Off also shows its versatility by featuring other forms of gender-based violence (wife battery, domestic violence, etc). Cut Off is not only campaigning against FGM but also against other forms of GBV.” –

“Cut Off is a call for action on the part of all, men especially, to help in putting an end to the travails of voiceless young girls and women in our society. It is educative and interesting as it touches on other aspects of domestic violence, which has claimed the lives of many. The ‘cut’ has to be put to an end because its disadvantages surpass its supposed advantages.”