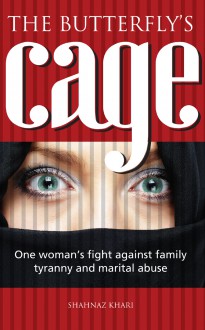 The Butterfly’s Cage, is the moving and shocking story of a young Pakistani woman who endured years of violence and intimidation by her family, simply because she refused to accept her treatment at the hands of not one but two controlling, violent husbands. Shahnaz was born into a wealthy family with homes in Britain and Pakistan. At 12 she was made to give up school to look after her younger brothers. There followed two arranged marriages, first to a man who turned out to be a violent drug addict and petty criminal, then to a vicious, controlling sadist. Shahnaz’ family refused to listen to her pleas for the freedom to live her own life. Instead they cast her as the wicked, immoral daughter whose selfish desire to escape from her marital hell threatened to damage the family’s good name. After years of abuse and intimidation in both England and Pakistan, Shahnaz fled the family home to try to start a new life in London with her young daughter. Lured back to Pakistan under false pretences by her family, she was beaten up, stripped of her possessions, threatened with shooting and drowning and kept under house arrest for the next 18 months.

Now, six years after finally winning her independence, Shahnaz has published her story. She has written it to reveal the pain and suffering that can be caused by the misguided cultural attitudes and social values to which she has been exposed.