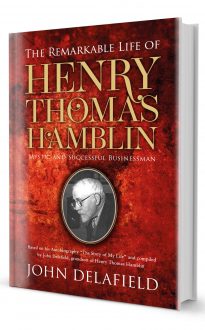 This book tells about the life experiences of Henry Thomas Hamblin, often known as HTH, and the philosophy he developed which was principally of the omnipresence of God with a clear focus on the teachings of Jesus Christ. Although he had a broad appreciation of the power of other beliefs to help a searcher find God, he wrote that God was latent within every human being. In today’s language he might have said that every human is ‘hard-wired’ to need God but that this feature must be activated. He would certainly say that God is with us now and always. He believed that health, happiness and a sense of achievement are the normal state for mankind but that to achieve this state the individual needed to align with what he referred to as ‘Cosmic Law’ which he also referred to as The Truth.

Over his 45 years as a prolific author, the emphasis of Hamblin’s work developed from suggesting to his readers how to change their lives through ‘right thought’ and faith to teaching them how to find a living consciousness of God within themselves. It was this process which led him to publishing a monthly magazine called The Science of Thought Review which endured for some 85 years before being re-orientated as a larger sized printed magazine entitled New Vision (later to be called Hamblin Vision) which endured for a further 20 years and is now on-line only.

Hamblin’s work continues to this day through the Hamblin Trust, which propagates the work he began in 1921, when he was in his mid-40s, and, in keeping with the times of 100 years later, now operates in a new “on-line” environment publishing some of his books as well as Hamblin Vision, the magazine that follows the path established by the original The Science of Thought Review.

This new book has been compiled by his grandson, John Delafield, based on HTH’s own works and is written just over 100 years after HTH launched into his life’s work as a disciple of God. His work and advice became widely read and was followed by many.