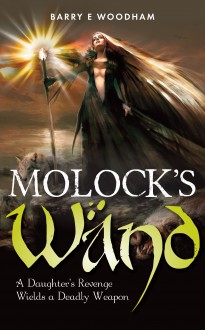 The defeated are not always destroyed. In the immense science-fiction-fantasy universe of trolls, elves, humans, dinosaurs, gnomes and goblins, Molock’s Wand is the epic sequel to The Elf War. When a sudden rebellion by the slaves under her command destroys her Dark Elf stronghold and forces Eloen, the Halfling daughter of the cruel Molock, to flee into the wasteland of Aifheimr she vows vengeance on the Light Elf-led alliance… Leaving a bloody trail of death and destruction across the realm and eventually stowing away on the world-crossing vessel known as the Spellbinder, Eloen escapes to the peaceful Light Elf homeland of Haven in search of a formidable weapon buried alongside her brother. If claimed, this weapon will allow Eloen to perfect the crude race known as the Dokka’lfar and continue the reign of terror that her father started. It once again falls to the High King Peterkin to renew old alliances and form new ones, as well as enlist the help of some unexpected old friends, to rebuff the onslaught of Eloen’s tyranny. But as the pursuit begins he finds that Eloen is always one step ahead and she is getting ever closer to plunging the world into her own breed of darkness…