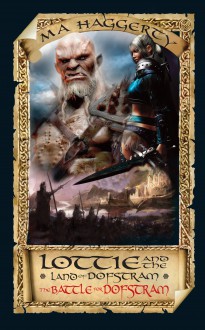 Lottie and the Land of Dofstram – The Battle for Dofstram

In the climactic third and final book of the epic fantasy series, Lottie must once again return to the fantasy world of Dofstram in a spectacular showdown with the evil forces of Zanus. When Lottie Monterencie started a quiet job in a library, she had no idea of the incredible and dangerous new world she would discover. Discovering that her parents are imprisoned in the realm of Dofstram by the power-hungry Zanus, Lottie was forced to enter this strange world to save them. Now Lottie is faced with her greatest test yet as she returns once again to the hidden realm that lies within an old grandfather clock. Lottie and her allies must prepare to fight for the last time but first they must embark on a terrifying mission to the depths of Zanus’s dungeon. Despite the help of her talking pets, Scruffy and Allsorts, Lottie faces the warped creations of the witch-creature Imelda and the ferocious Crocanthus and she begins to doubt that she will make it through alive. In The Battle for Dofstram, the trilogy reaches its epic conclusion as the hordes of foul creatures led by Zanus collide with Lottie, King Alfreston and their allies in a dramatic final confrontation.

With the odds stacked against her, will Lottie survive her final adventure?