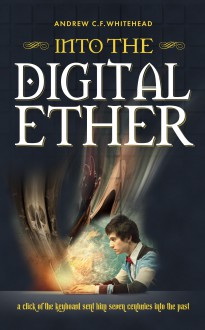 Into The Digital Ether

When his parents and younger siblings leave on a 10-week holiday to Australia, 17-year-old Edmund finds himself transported to the 14th century at the beginning of the Black Death. He tries to help the people of that time with his 21st century knowledge of medical science. Along the way he makes many friends – and a few enemies, among those who do not like his interfering ways because they contradict the beliefs of the Medieval period.

Edmund travels around the area he grew up in as it was seven centuries earlier, noting the similarities and the changes. His experiences give him many pleasures and a few difficulties as he tries to fit into Medieval society. This causes him and his new friends confusion, laughter and some embarrassment – along with a promise of romance. Edmund’s influence finally becomes too much of a threat to the powers of the time, and they try to silence him. How will Edmund deal with this – and will he survive?