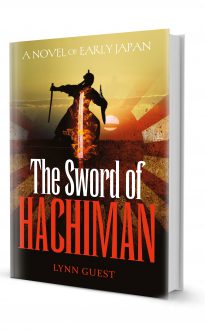 The Sword of Hachiman by Mereo Books

“Twelfth-century Japan, the dawn of the Shogun era. Two mighty warrior clans, the Minamoto and the Taira, struggle for power of the figurehead Cloistered Emperor. At the moment, the Taira are in uneasy control, but the three Minamoto sons, separated and exiled at birth,are secretly reuniting to conquer the Taira and avenge their father’s bloody death. Although the eldest is the leader, it is the youngest, Yoshitsuné, whom the warlike monks who sheltered him and trained him in the martial arts deem worthy of possessing the family heirloom, the sword of Hachiman – the sword of the War God.

With striking colour and authenticity, Lynn Guest unfolds the story of one of the most romantic and celebrated heroes in Japanese history and legend. Yoshitsuné is initiated into espionage and
love in the bedchamber of a young Taira noblewoman. Soon tested in the ferocious hand-to-hand combat that is his birthright, he wins his first and most faithful retainer, the fierce, hard-drinking monk, Benkei. We follow Yoshitsuné behind the scenes of the rarefied Cloister Court, where the delicate, sarcastic emperor desperately manipulates the lords who hold him prisoner – but who nevertheless must have his blessing to act.

Two extraordinary women enter Yoshitsuné’s life: Shizuka, whose artistry and independence fascinate and lure him, but fatally deny her his protection; and the lady Tamako, a Taira whom he
marries for political advantage, but who stands by him in the ultimate sacrifice of a samurai wife. In a poignant climax, jealousy pits the eldest brother against the loyal Yoshitsuné, just as victory is grasped and the first Shogun – a Minamoto – is seated, thus assuring the supremacy of the samurai whose code held sway over Japan from then to modern times. The Sword of Hachiman is a richly detailed panorama of an era that fires our imagination today.”