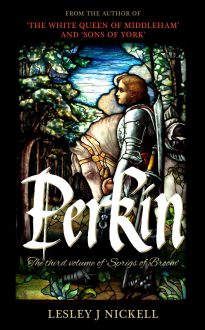 Perkin Warbeck appeared from nowhere and claimed to be Richard Duke of York, the younger son of Edward IV – one of the ‘Princes in the Tower’.

To some people, including the influential and rich Margaret Duchess of Burgundy, he was the real thing – tall and handsome like her brother the late king and a true heir to the Plantagenet legacy.

Others suspected that he was an imposter; but they couldn’t be certain. And in the whole of Europe, only Janet Evershed knew the truth: that he was, indeed, the son of King Edward, but a bastard with no claim to
the throne.
Perkin saw himself as a chivalrous Knight of the Round Table, coming to rescue the downtrodden English from a murderous tyrant usurper. But the reality of his situation did not match his shining vision and offered him questions instead of answers. What was the right thing to do?

This is the third part of the trilogy Sprigs of Broom:
The White Queen of Middleham
Sons of York
Perkin

15% DISCOUNT AVAILABLE FOR ALL PRE-ORDERS