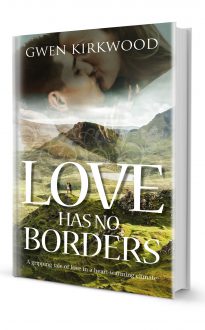 < Back to Romantic Fiction

Love Has No Borders by Mereo Books

Fiercely independent, Marguerite Sinclair has the opportunity of a lifetime to become a nurse and contribute to the war effort in France. Meanwhile Rick who has loved her from the first moment he saw her asks her to marry him before being shipped off to the war front. Despite their distance, he pursues her in a romantic cross-country courtship. She refuses him but soon after begins to realise how strong her feelings for him are in his absence.

They manage a few brief meetings during the next two years when Rick has leave, in the meantime, he somehow manages to survive the carnage of the world war unscathed. Unfortunately, Marguerite doesn’t and has a fall on an icy path breaking her wrist and becoming very ill as a result. All her plans are shattered, and she is sent home from the war along with three wounded soldiers to recover. Once recovered she is offered a position nursing the war wounded in Scotland and eventually meets up again with Rick who persuades her to marry him. They end up living in a wing of Silverbeck Hall which they make their home and celebrate the end of the war with all the estates tenants and old friend Lord Hanley, the estate owner.