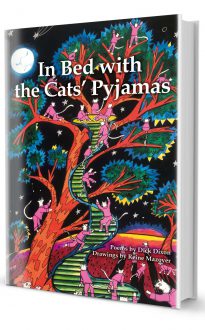 In Bed with the Cats Pyjamas by Mereo Books

Welcome everyone, to the world of illustrated humorous (or possibly
philosophical) poetry. The current book is the fourth in a series that
began with ‘Rhymes for no Reason’, continuing with ‘Rhymes of the
Newfangled Mariner’ and ‘The Curse of the Square Crow’.
We are aiming to continue a tradition of such writing, which seems
to be in danger in this strange new world of digital downloads and
Bluetooth, of dying the most undignified death of a thousand or so
cuts. The solution of course is to breathe new life into the stricken
patient by the simple means of ink, paint and paper. In an even older
tradition, it might have been ‘stone, scissors and paper’, but alas that
does not usually result in a book.
It would be a shame, surely, not to be able to read about a new kind
of umbrella that can help you to make a cup of tea in a completely
original and unexpected way, at the same time saving on your
water bills – or how to settle the question of whether you are really
a divine being, presumably in disguise, and no matter what your
other half has to say on the subject. On the other hand, we reveal
the little-known secret of baby beets, which are so often discovered
languishing in jars in a supermarket setting; they come to us by a
very strange process indeed, which is presented here for the very
first time I would imagine. I doubt whether this kind of revelation
is likely to find its way to the Sunday papers, but surely it must be a
close-run thing.
Have you heard the strange story of the vicar of Stiffkey, and how
he managed to depart this earth at the hands (or perhaps paws, or
even jaws) of a lioness? It is a small, but amazing part of the story of
our lives in these islands.
There again, did you realise how important the humble doorknob
is in the diagnosis of disease in our doctors’ surgeries? I do regret
having to ‘spill the beans’ on this one, but it had to be done I think.
In any case, this phenomenon has been recognised as important
from the early days of medicine, for example Doctor Finlay, or at
least since we had knobs on our doors! Handles are also good, but
do not have quite the same magical aura of course.
I must just mention a final thing of some importance: how to rid
your bedroom of mosquitoes in the summer; surely nobody wishes
to be plagued with these rotten insects. The solution to this may
involve a trip to Tibet, but it will be well worth the effort, as you will
see. You will not see this on a comparison website, I promise!
There are many other curious situations and ideas described in
the thirty-three poems, each of which has its own illustration in full
colour by the well-known brilliant French artist Reine Mazoyer –
and for those people whose native language is French, we have, as
in ‘The Curse of the Square Crow’, provided French explanations of
the poems, towards the end of the book.
We wish you a happy time as you grapple with some of the
strangenesses of our lives today – or was it yesterday?