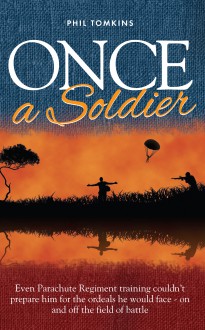 Travis’ father was a failed soldier, a coward and a heartless bully who tried to disown his son. Now Travis is determined to shame him by becoming the soldier his father could never have been – through joining the Parachute Regiment, the élite of the British Army. His restless urge to prove himself takes him from country to country and from army to army, where he battles with enemies both external and internal until he is finally able to put horror and tragedy behind him and find honour, love and peace. ‘The sounds of the battle were like some crazy symphony, orchestrated by a mad composer and led by an even madder conductor who had decided to play all his heavy brass instruments at the same time and all of his percussion, bass drums pounding amid the deafening clashes of cymbals. His instruments were automatic rifle fire, hand grenades, grenade launchers, claymore mines, light and heavy machine guns and mortars. For vocals he had the screams of the wounded and dying.’

‘A killer story, with a strong emotional core, powerful themes that will touch hearts and a believable protagonist’ – Kaye Jones, History in an Hour.