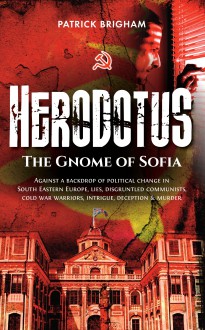 Herodotus – The Gnome of Sofia

Against a backdrop of political change in South Eastern Europe, the story embraces disgruntled communists, cold war warriors, intrigue, deception and finally murder. Sir Arthur Cumberpot has an unspectacular career which is swiftly drawn to a close when he is appointed British Ambassador to Bulgaria. Due to some unforeseen mishaps his wife Annabel is accused of being a spy and sent home to their house in Watlington while her background is checked by MI5. Annabel is guilty of nothing, other than being the biological daughter of Jim Kilbey, Britain’s most famous spy. It seems that a jealous god has sought to visit the sins of the father upon her, but so has everyone else. She is the victim of serendipity, but also of cover ups, the duplication of thin evidence and exaggeration. But she is also heartless, treacherous, self-indulgent and without shame.