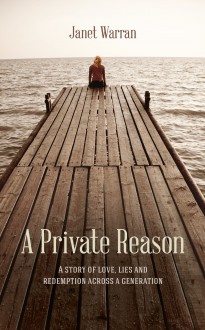 At the heart of this closely-woven tale of love and human frailty lies the quiet, enigmatic figure of Christina Mansfield. It is wartime London and no one’s future is secure. Little Christina has her family all around her but to her they seem as cruel and unpredictable as the rest of the world – her brother is a solitary figure, her sister is brash but priggish, her mother vague.

As for her father…

From the 1940s to the early years of the twenty-first century, from the West Indies to West Sussex, Christina’s story unfolds, partly in her own words, partly through the observations and perceptions of those about her – as an artist, she becomes a woman with an extraordinary passion for life. But has she really escaped from her family, from the secrets that have been kept, the picture they have painted of themselves? Now Christina’s illegitimate daughter Eleanor is here, struggling to find her place in the world. Is there still time for the greatest deception of all to be exposed?

“Dazzling. A cross between Faulkner and Mary Shelley – gothic and thrilling”
Laura Kasischke, author of ‘White Bird in a Blizzard’ and winner of the National Book Critics Circle Award