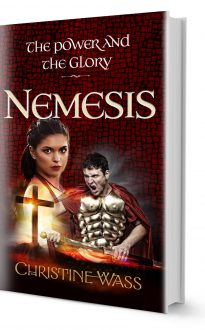 The Power and the Glory – Nemesis by Mereo Books

In Jerusalem in the aftermath of the Crucifixion, the story of Jesus is beginning to spread, but so too is the opposition. The occupying Roman army is in savage conflict with rebel forces, who have taken as their prisoner a beautiful dancing girl, al-Maisan. A young Roman Tribune, Flavius Silvanus, has fallen for al-Maisan and is desperate to find and rescue her, but in this time of war his duty to his country must come first. In this second part of the trilogy, startling news of al-Maisan’s fate has arrived, just as Flavius and his men are preparing for a fateful clash with the cruel rebel leader ben-Ezra and his desperate band of renegades.