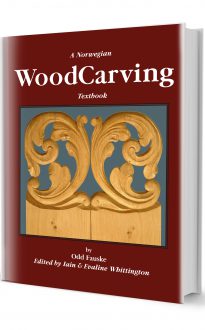 Acanthus remains a popular form of low relief woodcarving with a long history in Europe, especially in Norway, where the style also appears in their folk-art. It also has a strong following in the North America, having been assimilated from the “Norsk-Amerikan” community into main-stream woodcarving. It is the predominant influence in the Norwegian style of woodcarving with many regional interpretations and variations. The late Odd Fauske was an expert proponent of the style, reflected in the output of traditional wooden furniture and fittings from his workshop in central Norway. His knowledge and patterns did not pass with him at his untimely death, as he had earlier committed them to print to the benefit of the adult education program in Norway. With the support and assistance of his family, archival material from his work has been brought back to life and enhanced with a new English translation in this compendium of his work. Here you will find a treasure trove of carving patterns covering many areas of design; from furniture and fittings to architectural components, together with traditional Norwegian household items. This lack of project plans was recognised during the heyday of adult education (evening) craft classes in the 1970’s in Norway, with Amrud including a catalogue of mail-order patterns in the back of his classic book. This new book is based on Odd Fauske’s “Lærebok i treskjæring”, a compendia of project plans for woodcarving and folk-art published by Fauske in the 1970’s. Few of such classics were available in English, although some books have been published on the subject of the acanthus style. In Norway, many books have been published (including some pattern books) but detailed project plans are now hard to find as these books are long out-of-print. This new book includes Fauske’s full sized patterns for a variety of common carvings, 14 different spoons-carvings (many in 3 sizes), 8 different mangle-boards and a variety of previously widely used Norwegian household items from, a porridge pail to log a chair, plus a variety of panel designs, from small boxes to doors, together with patterns for carving a full sized linen chest and will provide plenty of inspiration for carving projects, from a simple key-rack to detailed plans for a traditional acanthus style mirror frame, together with many traditional Norwegian items of folk art, such as mangle-boards, spoons, ladles and furniture, fittings plus architectural items. All plans are reproduced full-size to enable them to be copied easily for personal use, either in the traditional tracing paper method (described in the book), by photocopying, or through scanning & printing by computer. This monochrome book was originally published in 1973 as an easy-to-use guide to support the teaching of woodcarving in Norway, with information and guidance for the beginner, taking them on to advanced level patterns by the end of the book. Iain Whittington has brought his experience of map production and the writing of woodcarving articles to the editing of the old material and has added a new introduction – a guide to the history and special place in Norwegian life for woodcarvings. Fauske’s work has been professionally translated by Evaline Whittington. With this new introduction on the history of carving in Norway, this book is putting Norwegian woodcarving into perspective in this updated and improved re-print of Fauske’s 20th century masterpiece. Computer graphics have been used to supplement some of the original drawings, to give a better impression of the final work. This is an enhanced facsimile monochrome re-print, providing a very economical book with a wealth of full sized traditional patterns, all with wide appeal to a range of amateur wood-carvers, spoon-carvers and folk-artists.