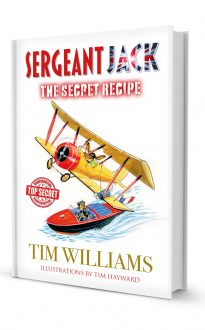 The Terriertorials are a team of plucky terriers whose mission is to safeguard their precious supplies of food and
treats from doggy raiders on the other side of the English Channel in the years after the Second World War.

When Monty, the Terriertorials’ undercover agent in France, discovers that a team of dogs from the French Bulldog Elite Division is secretly heading across the Channel on a mission to steal the Terriertorials’ precious secret recipe for Choco Delight, he knows that he and the other Terriertorials must stop the bulldog raiders at all costs.