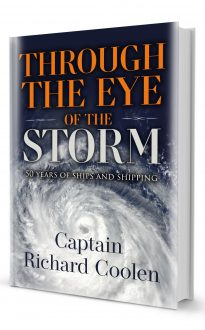 Through The Eye of The Storm by Mereo Books™

Richard Coolen began his maritime career soon after World War II as a teenage apprentice on tramp ships (general purpose freight carriers). He rose through the ranks to become Master of his first ship in 1962, while still in his thirties. After years of ploughing through the world’s oceans from Hudson Bay to the South Pacific, he was persuaded ashore to take a series of very senior management positions in the shipping industry. He became Honorary Consul for the Netherlands, then for Germany, and devoted much of his later years to the RNLI and its lifeboat service before finally retiring. In this memoir, completed in his 90th year, he has distilled some of the more colourful stories from his varied life afloat and ashore.