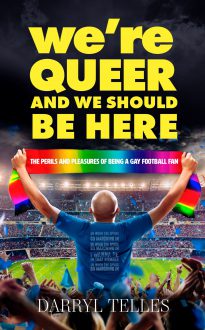 We’re Queer And We Should Be Here

Darryl Telles’s sexuality is as important to him as his lifelong passion for his beloved Tottenham Hotspur, yet like other gay football supporters, he has had to endure decades of abuse and threats from homophobic fellow fans in a sport where homosexuality is still so reviled that there is not a single ‘out’ gay player in the top four tiers of the Football League. This is the story of his campaign against homophobia in the football world, his work with the Gay Football Supporters Network (GFSN) and his attempts to advance the cause through media publicity and TV interviews.

“Most of the crowd are white, so you stick out because of your brown face. They’re singing the sort of chants that make you feel unwelcome, and not only because of your colour – they just can’t stand anyone who’s a poof, an arsebandit, a queer or a raving homosexual. And that’s exactly what you are…”