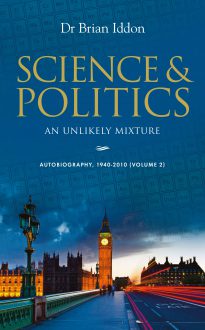 In Volume 1 of his autobiography Brian Iddon wrote of his early years on the West Lancashire Plain, his school and university education and his career researching and teaching chemistry at the universities of Durham and Salford; his demonstration lecture ‘The Magic of Chemistry’ was presented in Britain and elsewhere in Europe for 29 years. In Volume 2 he describes how he became involved in politics and was elected to Bolton Council, serving from 1977 until 1998, with a spell as chairman of the Housing Committee. He was persuaded to stand for Parliament in 1997 in Bolton South East, which he represented until his retirement in 2010. Brian helped to steer through three Acts of Parliament and was a Member of the Science and Technology Select Committee. Woven through both volumes are reminders that MPs have private lives too. In his retirement Brian has turned to writing; he has written a biography of the Wigan artist Lawrence James Isherwood and an important timeline of Bolton’s political and social history, as well as serving on four boards in London and holding voluntary posts in education and with a local charity.Brian hopes this book, probably one of the most detailed accounts of a Parliamentary career written in modern times by a back-bench MP, will help to dispel the myth that MPs have an easy life.