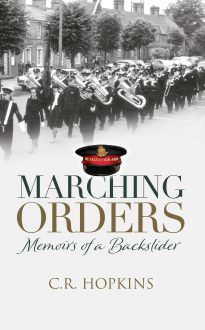 Clive Hopkins’s parents were Salvation Army Officers, which meant their sons had to endure six hours of religious meetings every Sunday (and no football), most kinds of pleasure (including girls) were off limits and friendships were disrupted by frequent moves to new postings. When finally at the age of 14 Clive was coerced into becoming a Soldier himself, it was a step too far, and like his older brother he rebelled and became a ‘backslider’. He has now written this entertaining and moving memoir of a youth spent trying to balance the desire to enjoy a normal boyhood with the demands of his parents’ calling. In his story, Clive captures evocatively a lost world – and finally resolves a family mystery.