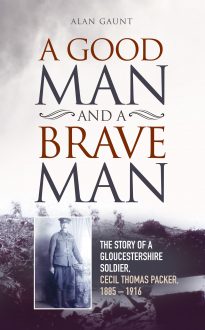 A Good Man And A Brave Man

Cecil Packer was a farm labourer, a factory worker, a shepherd and a devoted family man from Wiltshire who like so many others was sent to France to fight for his country in the First World War, and never returned. Cecil survived both the Gallipoli and Somme campaigns, so for his descendants, his death on the Western Front when his battalion was far from the front line was a mystery as well as a tragedy. Alan Gaunt, whose wife Shirley is Cecil’s great-granddaughter, set about researching Cecil’s humble but interesting life and finally established the tragic circumstances of his accidental death in December 1916 at the age of 31.

“This is not the story of a traditional hero in the mould of Nelson or Wellington but that of a village shepherd, a local man who did not come from the nobility or the ranks of the nation’s leaders but simply loved his family and died in the service of his country.”