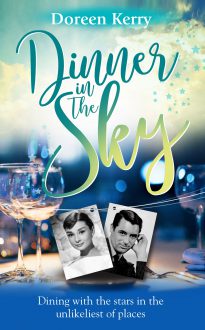 Dinner in the Sky

Doreen Kerry’s first book, Pathway to the Moon, was a ‘voyage of discovery’ into the new life she found herself living after the tragic early death of her husband. Her second, When Angels Fall, featured an imaginary court hearing in which she staged an imaginary trial for those whose negligence she felt had contributed to his death. In this volume, she indulges in another entertaining flight of fancy, with imaginary visits to restaurants frequented by stars from the golden era of Hollywood.

“My husband had died, but my humour had remained, and it became my literary medicine throughout.”