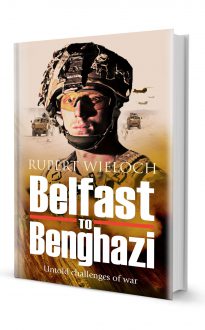 Rupert Wieloch has seen more than his share of front-line military action, having served as a platoon commander during the Troubles in Northern Ireland, before leading a squadron during the Gulf War in 1990. Deploying to Bosnia with the United Nations, his troops became renowned by the press as “Saviours of the Children” after he planned and executed the largest defensive battle fought by a Commonwealth combat force for 20 years. Having worked as a spokesperson for the Army Board, Wieloch’s role moved to planning and strategy at the highest level. He played a key role in Operation Veritas, the UK’s response to 9/11, as part of the team which developed the UK’s campaign against international terrorism. With this wealth of experience, he went on to command the British contingent in the NATO mission to Iraq and later to serve as the Senior British Military Commander in Libya following the fall of Gaddafi. As the author puts it: “I hope this book opens eyes to a few unheralded escapades and adds colour to some historic events”.